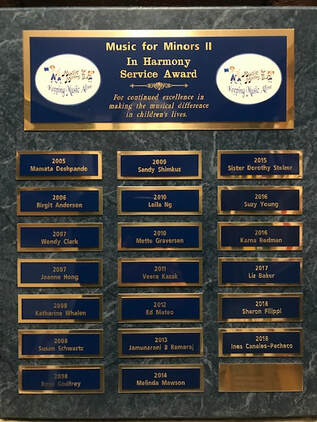 Each year Music for Minors II recognizes a docent, liaison, or board member whose commitment to children and the MFMII program has been outstanding and particularly deserving of recognition.  This person would have gone above and beyond the norm for volunteer work within MFMII.  This person should have also worked in more than one area in the organization such as docent and liaison or board member. Nominations are always welcome. Email ed@musicforminors2.org .
​
2005  Mamata Deshpande
2006  Birgit Andersen
2007  Wendy Clark and Joanne Hong
2008  Katharine Whalen, Susan Schwartz, Rose Godfrey
2009  Sandy Shimkus
2010  Lelia Ng, Mette Graverson
2011   Veera Kazak
2012  Ed Mateo
​2013  Jamunarani B Ramaraj (Jem)
2014  Melinda Mawson
2015  Sister Dorothy Stelzer
2016  Karna Redman and Suzy Young
2017  Liz Baker
2018  Ines Canales-Pacheco and Sharon Filippi
2019  Elisabeth Huffmaster
2020  Kathy Garfinkle
2021   Cissy Chen and Serena Huang
2022  Trupti Ramball and Claire Sauret

​In addition to the many PTA awards received by MFMII docents and grants received by Music for Minors II in recognition of our mission and service over the years, MFMII is the proud recipient of the following awards:

2012: To Rachel Bello, MFMII Docent: Castro Valley School District, School Board Recognition, January 26, 2012, Stanton Elementary School. "Positive... Enthusiastic... Creative... Dedicated... Always Smiling... these are words that our staff has used to describe Rachel Bello. Rachel has been instrumental in our Music for Minors II program. For the past four years, Rachel has been a music docent and has touched the lives of hundreds of our students. Students look forward to Rachel coming into their classroom where she actively engages students in song and movement. She has made a positive influence on the students and has done a great job making personal connections with them. Although her own children have moved on from our school, Rachel continues to volunteer her time to teach music in the primary grades. Her love and commitment to our students is appreciated. Stanton Elementary is thankful to have a volulnteer like her. Thank you Rachel!"

2008: California State 20th Assembly District Certificate of Recognition presented to Music for Minors II in 2008 in honor of supporting Music Education in the Tri-City area since 1988 and in appreciation for MFMII's leadership in bringing music education to our schools.

2006: Award of Excellence and California State Senate Certificate of Recognition